Destructive robots are running rampant across the world! Nadine, an incomplete prototype robot of unknown origin, fights to save the world while searching for her creator.

Prototype N is a run-and-gun sidescrolling platformer. The player advances through stages of tricky platforming, collecting gems, new weapons and other items along the way!

The player is always equipped with their default weapon, the Plasma Blaster, but new sub weapons can be found scattered across the stages. They each have their own unique properities and interact with enemies and the environment in different ways. Try them out!

In this demo, there are a total of five unique Sub Weapons and one main weapon! You can only carry up to two Sub Weapons at a time and all Sub Weapons share the same ammo.

Plasma Blaster
It does nothing special as its the weakest weapon as its damage output is low and its range is a bit on the short side. However it can be fired rapidly making up for its weak output and its usage is infinite!

Remote Missile
This powerful weapon can bust open tougher things such as steel boxes! However, it cannot pierce through enemy shields and its movement is a bit on the slow side. One of its best features is the ability to guide it vertically as it endlessly propels forward.

Cluster Bomb
As the name suggests, Cluster Bombs explodes into a cluster of smaller bombs upon impact. Both it and its smaller bombs can pierce through enemy shields, including seemingly "indestructable" enemies. It's main weakness is the slightly difficult aim and a higher ammo consumption.

Flame Cannon
This rapid firing flamethrower can tear down enemies fast, but its ammo consumption is a bit on the quick side. What other uses could it have?

Twin Lasers
A weapon that always moves diagonally. They can do a clean constant hit through enemies and bounce all over the room. They dissipate after a few bounces.

Bolt Strike
A weapon with a very high ammo consumption. It creates screen-killing lighting strikes when it's launched into the air. Because of it's power, it's rare and only found in a secret area in this demo. Can you find it?

And everyone else who helped out when I needed! Thank you!!

Additionally, the Controls Manual & Credits are found in the zip file.

ANTI VIRUS NOTICE: For whatever reason, a few certain anti viruses programs such as Avast sees the game as a threat. I've submitted my games to them to ensure they stop seeing it as one. They're false positives thankfully. So if you have issues trying to open the game, I'd recommend disabling the anti virus for now or have it make the game an exception.

Extract the contents of the zip file into an empty folder. That's really it! Running the game directly from the zip file is not recommended as not only will the music not play but the game won't save as well.

I really like this a lot, it brought me back to the sonic 2 days but with that weird (but very cool) megaman attack system (buster, power ups)

THIS IS SO GOOD

THIS IS LIKE THE BEST ORIGINAL SAGE GAME SO FAR

THANK YOU FOR MAKING THIS I LOVE IT SO MUCH

Loved it, great demo! Very solid and straight forward mechanics. Liked all the hidden areas, but I did jump down a few holes thinking they were hidden areas when they were actually just death pits.

Enemy design was fun, I loved the slide, and didn't feel a need for a free aim as the game was designed around only being able to shoot left / right, at least in this demo! Also liked how the flamethrower was used for small puzzle solving when it came to finding the right angle to burn the wood blocks.

This is very solid. A lot of the mechanics are interesting and I like the style. The addition of the challenge score system in this demo is good since it made me play it more times then I thought I would trying to get that perfect score. I realized a lot of things that I would have missed on one or two playthroughs.

The slide feels really good. I got the hang of abusing slide jumping for speed running purposes and the movement started to feel really good to me.

The weapons feel good except for the missile launcher. I'm not sure if the lag in the air is really necessary. The other weapons don't have any restrictions in the air and feel about as powerful.

The fire mechanic is good enough to design a whole level around. Having to have enough weapon energy to burn the last set of ropes at the end is a neat little challenge.

I feel like the controls could be streamlined a little bit. Have you thought about using the up or down inputs more? I think being able to crouch under projectiles along with a slide cancel would be good additions.

This is a minor complaint, but I kept wishing there was a faster way to get maximum height on the springs. Maybe with a well timed jump button press like in other games?

-I might do something regarding the Remote Missile's mid-air recoil. Something about it doesn't feel right. But otherwise, I did add the lag to balance it around the fact it's a powerful weapon.

-Crouching might be a feature. I'm deciding between that or multi-directional shots. Slide cancel has been added in the upcoming patch, so look forward to that!

-I've slightly adjusted the strength of the spring as it was frustratingly slow to reach maximum height. It should be noticably better in the next patch.

Thanks for the feedback!

I really like how the slide feels, the weapons are versatile and varied, the visuals look great, I like the soundtrack so far, you can rebind the controls which is always a welcome inclusion, the enemies are decently varied, I like the branching paths, there's a lot to like here for what is so far only a prototype.

-What if you made it so, when you hit an enemy with an attack, the projectile, in addition to exploding, also had debris particles? And if you do that, what if the number of debris particles were based on the amount of damage the attack did? Might give the combat more of a punch (it already feels nice don't get me wrong) and while conveying information to the player, if you think it wouldn't be too hard to implement/too far beyond the project's scope/etc.

-What if the player could adjust the height the cluster bomb fires at using up or down? It could potentially make it too good admittedly, so I can understand if implementing that wouldn't make sense for balance reasons, but it has the potential to be fun so I thought I'd suggest it in any case.

-Perhaps adding a slide cancel button could make sense? As it stands there isn't any way to cancel a slide early after it's been started best as I can tell, so adding a button mapping for cancelling a slide could be helpful as an option. Alternatively and/or additionally, perhaps pressing down could cancel a slide? It's not really necessary, the game controls fine as-is, but not having to commit to slide speed (keeping in mind you keep slide speed if you jump while sliding until you land) would potentially make the game a bit more forgiving.

-Yeah I was thinking of doing that with the Remote Missile. It doesn't have enough impact in general.

-I was thiinking of adding back the multi-directional shooting for a few weapons, but decided against it for the demo due to time + I wanted to avoid giving it to the Flame Cannon as it'd break the one puzzle in the level. I'll see what I can do!

-Sure! I think Down will work fine for it.

It's a definitely solid prototype, though as it is it deserves refinement.
Here are my thoughts and suggestions.

- A speed increase. While the controls are responsive, the movement feels a tiny bit slow. Frameskipping will help this, though it could also be adressed at the physics level. This is a delicate issue that I'm sure you've spent a lot of time tweaking.

- Make me want to use the secondary weapons in combat. This means making them slightly overpowered, as I need to make the choice to spend ammo on shooting when I could just use plasma. Personally, I would also have them fired on a second attack button, so I can easily switch between plasma and the secondary I have selected.

- The best part of the tutorial (IMO) was finding secrets and how it taught you to use fire on hay. The gameplay should more properly imply/teach the combat role of the secondary weapons (the dash's attack value too), essentially forcing you to use them against enemies. After ponderance, I think the missile would be effective against distant enemies and the fire against crowds, but I would have liked to learn that organically.
Probably remedied with more levels in general.

- Challenge in general. I am aware that this is like complaining an appetizer platter should have more protein in it, so instead I am going to wait patiently for a later release when the game actually has a difficulty ramp.

- Feedback for pressing up and down. Cave Story has good visual feedback for pressing those keys - of note is Down (used for interaction when on the ground) turning the character to look away from the camera and placing a ? over their head.
A little aiming would be nice, but it's also important in your design and I'd understand if you don't want to implement it.

Overall, a solid demo for what it's worth with a lot of potential for future challenges.

-The player used to move faster in older builds, but I often felt he was a little too fast. I will see about adjusting it again though now that I got a better idea of how to do it!

-This was an idea that was in my mind for a while. I migghhttt make it so there's an extra button just to use Plasma. I will also try to balance the weapons more too. I forgot to add the function of Cluster Bombs to pierce through armored enemies (such as Tortoisebot hiding in shell).

-Oh yeah. This is the very first level, so it was designed to be pretty easy and to focus on the core mechanics. I had thoughts of making it harder just for this demo since it was the only stage though. The next major demo update will have plenty of stages.

-Yeah, I was gonna do something like that! Might have it so there's a button prompt showing along side the arrow.

Thanks for the feedback!!

Very interesting game, love the genesis (?) style. i enjoy it but there's something that i wanted to point out

at the early part of the third screen (the one that you put in second  screenshoot ) the pit is filled with diamond and you not died if you go down there, but  then later on part where you burn boxes to open a hole, you died if you fall. because the first pit is safe i thought it this pit would lead me to a secret room or something XD i think it's better to turn it into a spike pit rather than bottomless pit

btw please add frameskipping, it's not your fault but it's really slow in my laptop

I've been thinking of changing up the pits a bit. Maybe I'll add a secret area? Or maybe make it more clear it's a pit.

As for frameskipping I'll see adding that!

Loved it! It gives me Megaman vibes. For sure, I will buy it when it comes out. 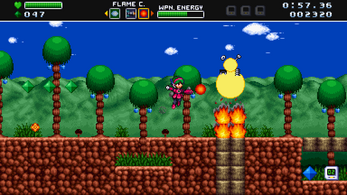 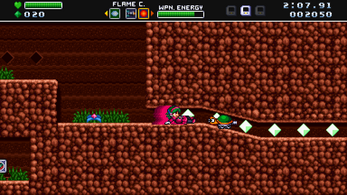 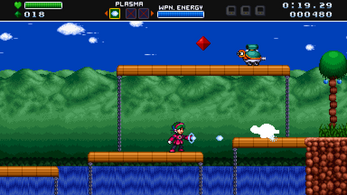